More than one third of the members of our little historical society doesn’t have roots in Bremen, but elsewhere. I have started collecting words in the dialect of Ober-Gleen in the 90ies, when my grandma Lina and our neighbour Lina Löb were still alive. At first, I thought about writing a dictionnary of the dialect first. But it has become so much more. In 2012, when my mom was about to sell the house in Ober-Gleen, I felt that it was a now-or-never-situation again. There were memories and words to be rescued. So we started the Owenglie project, Owenglie being the dialect word for Ober-Gleen. We did research in Ober-Gleen, but we always had a focus on Bremen and other parts of the world, as well. A lot of Hessians have migrated from Bremen and Bremerhaven to the US or Canada. People from Ober-Gleen, too. The Ober-Gleen project is a big multimedia project everyone can be a part of. That’s what makes it unique. We have collected hundreds of audios, several thousands of new and old digitalised photos and documents, try to get in contact with others who do research like the genealogist Matthias Eislöffel, Linda Silverman-Shefler and Carolyn Schott, authors and researchers with roots in Ober-Gleen.

In voluntary work, we have published four books in four years, “Ober-Gleen, Band 1: Gliesbeurel inner sich” (Ober-Gleen, volume 1: The people of Ober-Gleen who are called dumpling bags, among themselves), “Ober-Gleen, Band 2: Naut wie Ärwed” (Nothing than work), “Ober-Gleen, Band 3: Himmel un Höll” (Heaven and hell, about living and surviving in the countryside in two centuries) and “Band 4: “Schbille gieh un feiern” (Go out and celebrate, about the history of mobility and christian, jewish and other traditions of celebrating), plus my master degree’s work from university, written in 1991 about the beginning of WWII and public opinion. We helped Egon Brückner who was born in Egerland and lives in Ober-Gleen since 1948, to get his autobiography. Under the title “So klingt Owenglie” (the sounds of Ober-Gleen) we have published a Weidig audiobook to the honor of Friedrich Ludwig Weidig, the social revolutioneer who had been reverend in Ober-Gleen, arrested in 1835. After two years in jail, without trial, he killed himself. 84 people of Ober-Gleen had signed a petition in order to support him, one of the first petitions for a political prisoner in world history. The document seems to be lost, but there are police documents from the 19th century, proving that there had been the petition.

We have made three audio cds so far and two music cds of the concerts from the Weidig weekend whe had organised in Ober-Gleen in 2015. Veronika Bloemers (organ) and the Duo EigenArt of Nidderau (freedom songs). And that’s not all. We have a big photo archive that is to be organized, and audio material for another six cds, including a audio feature about the jewish families of Ober-Gleen. The book and cd team consists of Justus Randt, Wolfgang rulfs (the layouter) and me. We were not alone: We had help from my mother and others of the village, former neighbours and old friends. In order to learn my grandmother’s language, I have been coached by Sabine and Birgit, friends from Ober-Gleen. Two colleagues did most of the corrections, having a real heavy time adjusting to that mixture of German, dialect, some English and bits of other languages. One other friend is looking after Lastoria’s bank account and fills in the tax forms, and one is helping with the production of the cds. We have acomplished a lot in these four years, more than we had thought of. And we are still working on it, getting new contacts. The blog Owenglie written in German, dialect and English, is based on this website, and you find an interview on www.lastoria-bremen.de. Even the Amsterdam Project is connected to the Ober-Gleen-project. 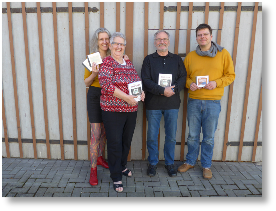